-GOVERNMENT BONDS-
Recession Issue Still Pressing Domestic Bond Market. The Minister of Finance projects that Indonesia’s GDP in 3Q20 will contract between 1% and 2.9%, it may even continue until the 4Q20 period. Meanwhile, the Minister of Finance projected domestic GDP to shrink 0.6% -1.7% on an annual basis. This sentiment hit the bond market yesterday. Meanwhile, external sentiment put pressure on the rupiah again. US home sales data for August period is better than the previous month. August home sales reached 6 million, or the highest level in the last 14 years. In addition, the PMI index for the US manufacturing sector for September reached 53.5. This figure is better than market expectations of only 52.5 and also better than the August realization of 53.1. Yesterday, the highest yield increase was recorded in 1-year SUN, up 9.1 bps, and the lowest increase in yield in 20-year tenors.

-CORPORATE BONDS-
Asian Companies Liquidity Pressure is Improving. Moody’s Investors Service said that the Asian Liquidity Stress Indicator (ALSI) improved in August 2020 to 37%. Previously, in July 2020, the ALSI rate reached 38.1 percent. However, ALSI remains high due to the weakness of 54 of the 146 companies in Asia rated by Moody’s. The ALSI indicator may decrease when speculative liquidity improves. The liquidity score is also calculated from the corporate family ratings (CFR). ALSI’s rankings were highest in South and Southeast Asia (Asean), although it decreased to 43.9% in August 2020 from 50% in July 2020. This reflects the improvement in the liquidity of two companies in Indonesia. Meanwhile, in northern Asia, the ALSI rate increased to 34.3% from 33.3% the previous month. Liquidity is still fairly weak due to the hitting industry in China. Meanwhile, the total bond issuance collected by Moody’s in August 2020 reached USD 3.4 billion, down from USD 7 billion in July. Property companies in China contributed 48% of total emissions in August 2020. Meanwhile, the total global bond issuance throughout 2020 in Asia also reached USD 28.4 billion, exceeding previous years, except 2019. (Bisnis Indonesia)

-MACROECONOMY-
Minister of Finance Targets Logistics Costs of 17% of GDP. The Minister of Finance said that the national logistics problem is one of the elements that greatly determines the competitiveness of the Indonesian economy. For the record, Indonesia’s logistics costs compared to its closest neighbors such as Singapore, Malaysia and others are still considered higher. This causes the Indonesian economy to continue to improve its competitiveness. Indonesia’s logistics costs incurred reach 23.5% of Indonesia’s GDP, compared to Malaysia’s only 13% of GDP. On the other hand, if seen from the logistical process, it has not shown significant improvement. So it is hoped that the formation of the national logistic economy (NLE) will be able to reduce our logistics costs, which are currently 23.5% of GDP, and can be reduced to 17% of GDP. A decrease in logistics costs of 5% -6% of GDP will also be contributed from the entire upstream to downstream process, especially connecting the transportation sectors and making it easier for business actors. (Kontan)

-RECOMMENDATION-
Lack of domestic positive sentiment, color weekend trading. A number of market players tended to pay close attention to external sentiment. Investors are watching the tug-of-war of certainty in providing stimulus, and ahead of the US election. Meanwhile, the Covid-19 case in Europe made some countries lockdown again. This policy further exacerbated the European PMI to contract to the level of 47.6, or lower than the US, which recorded expansion at 54.6. Yesterday, the rupiah closed down 0.51% to IDR 14,890 / USD in the spot market. Meanwhile, BI’s middle rate weakened 0.77% to the level of IDR 14,949 / USD. In the short term, investors can take advantage of the momentum of the FR0087 and FR0083 movements. 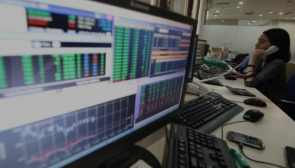