-GOVERNMENT BONDS-
Biden Effect Encourages Sukuk Auction. The election of Joe Biden as the new president of the United States (US), creates new hopes for the market. Investor project that global market conditions will be more conducive than the Trump administration. In addition, the completion of this US presidential election will reduce the level of global volatility. This has led investors to gradually return to emerging markets, particularly Indonesia. Yesterday, the total bid for Sukuk auction was valued at IDR 22.6 trillion. The highest entry bid was in the PBS028 series valued at IDR 8 trillion, with a weighted average yield of 7.31% and a nominal value of IDR 4.4 trillion. NHKSI Research sees domestic investors such as pension funds interested in this 26-year long tenor because it offers high yields. The next series is the 4-year short tenor PBS026, with an incoming bid of IDR 5.4 trillion. The weighted average yield of PBS026 was at 5.12% with a nominal value of IDR 1.6 trillion won. Meanwhile, the total nominal won from the sukuk auction this time is IDR 10 trillion.

-CORPORATE BONDS-
IFC Ready to Buy Adi Sarana Convertible Bonds. Adi Sarana Armada Tbk (ASSA) is preparing to raise funds of up to IDR 450 billion through a limited public offering by issuing convertible bonds. A member of the World Bank, the International Finance Corporation (IFC), is the standby buyer of this corporate action. Adi Sarana will offer up to 600 million convertible bonds that can be exchanged for new shares. The Company sets the exercise price for the conversion into new shares of IDR 750 per bond. The Indonesian Securities Rating Agency (Pefindo) has assigned an A- rating for this convertible bond. For the record, each holder of the company’s 453 old shares registered on January 7, 2021 is entitled to receive 80 new pre-emptive rights (HMETD). Each Rights issue entitles the holder to purchase one convertible bond. (Investor Daily)

-RECOMMENDATION-
Pfizer Vaccine Effect Positive Sentiment. NHKSI Research projects that the successful end-stage clinical trials of the Covid-19 vaccine from Pfizer and BioNTech will be a positive sentiment for global financial markets. Investors are paying close attention to this vaccine, which is claimed to be up to 90% potent and without dangerous side effects. This news makes life expectancy back to normal. Meanwhile, business activity increased again, which then prompted the economy to rise. This has led to emerging market risk assets such as Government Securities (SBN) to strengthen again. On the other hand, investors are still anticipating profit taking in line with the strengthening of the rupiah exchange rate in the past week. Yesterday, the rupiah closed slightly higher by 0.05% to IDR 14,058 / USD on the spot market. Meanwhile, BI’s middle rate strengthened 1.1% to IDR 14,015 / USD. Investors can take advantage of short-term volatility, take a look at the FR0082, FR0080, and FR0087. 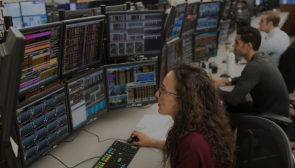 The US Dollar Is Coming Near to A 3-Month Low

Jobless claims increased by 8% WoW amid several technology sector layoffs. The efficiency efforts of several technology issuers in order to maintain healthier performance, along with the results of the FOMC Meeting Minutes on Wednesday local time, which showed the FFR increase may soon slow down.